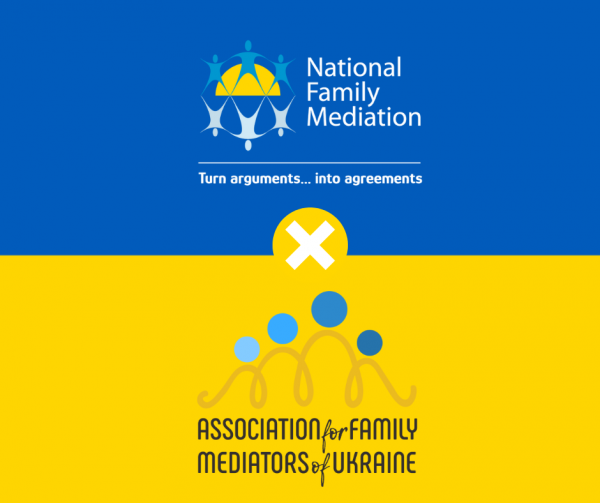 A Ukrainian refugee who fled the war in the Ukraine in search of safety for her children has partnered with the charity National Family Mediation (NFM) to offer free mediation for hosts and guests who are struggling to live together.

Svitlana Stadnyk, a qualified international family mediator and a head of the Association for Family Mediation of Ukraine, has partnered with the charity National Family Mediation (NFM) to offer mediation for hosts and guests who are struggling to live together.

She is offering her services to help prevent the breakdown of relationships which could result in hosts asking their guests to leave. There is no charge for the service so everyone who needs help with communication can count on it.

Svitlana, along with three other experienced Ukrainian mediators will work with NFM to offer the multilingual service. The charity is also providing training for the Ukrainian mediators so that they can become accredited to practice in the UK, and be able to earn a living.

As of 21 June 2022, around 92,700 visas have been issued to people under the Ukraine Sponsorship scheme which allows Ukrainian nationals and their family members to come to the UK if they have a named sponsor under the Homes for Ukraine Scheme.

In May, A Department for Levelling up, Housing and Communities spokesperson said that more than 46,100 people have arrived in the country, through both Ukraine Sponsorship Scheme, and the Ukraine Family Scheme.

However, while the department claims that the vast majority of these are settling in well, community groups are reporting concerns that a growing number of refugees are being made homeless after falling out with their hosts.

While such incidents are reportedly caused by typically well-meaning hosts failing to anticipate the enormity of the commitment until refugees arrived in their homes, adding to the stress and trauma of the newcomers, personality and cultural clashes, a lack of house rules, misunderstandings and communications are also resulting in issues.

Jane Robey, Chief Executive at NFM, said: “We all know the challenges the Ukrainians are facing and for many, their only option has been to flee their homes and their families to find safety.

“Many families both British and Ukrainian have generously stepped forward to offer homes to Ukrainians as hosts to those in need. Having negotiated the difficulties of visas and travel and once the dust settles from the upheaval, families are now dealing with the reality of sharing their homes and spaces.

“As the largest family mediation provider in England and Wales NFM understands only too well the benefit good communication and agreement can bring to any relationship, which is why we are working with the Association for Family Mediators of Ukraine to offer a free confidential service to Ukrainians and their hosts.

“Svitlana and the other mediators are incredibly brave and generous with their time, and we’re delighted to be able to support them in this way.”

Svitlana added: “Living with anyone is not easy at the best of times and most things have to be negotiated so that a comfortable compromise for peaceful coexistence can emerge.

“Add into the mix language barriers, cultural differences, new family constructs and financial pressures and there is a recipe for those well-intentioned actions to quickly deteriorate as communication problems prevent the growth of understanding and mutual support.

“Neither side of this equation wants their hard work in building this new relationship to break down but there will be inevitable stresses and strains along the way. Being unable to communicate is likely to be the biggest cause of tension and will fuel what might otherwise be simple problems that can be resolved amicably.”

Speaking to The Guardian last month, Iryna Terlecky, a board member of the Association of Ukrainians in Great Britain, said that their community was seeing these cases frequently and that is was their perception that they are increasing.

The association has also reported similar issues among those who arrived on the Ukraine family scheme – either caused by space problems or relationship breakdowns. Concerns also raised by the Local Government Association which has also said there had been a ‘concerning increase’ in Ukrainian arrivals presenting as homeless.

If you are a Ukraine host or a Ukrainian guest and feel that you may need a hand in communication, or even think that living together was a mistake, then NFM has teamed up with 4 Ukrainian mediators who will offer a free consultation to any household with issues, however large or small, where communication is a barrier that is creating conflict.

You will each be able to have a separate meeting with the mediator followed by a meeting together, hosted by the Ukrainian mediator, who will work with you to resolve your communication problems and allow you to develop guidelines for living together peacefully. The mediators are Ukrainian guests themselves and speak English & Ukrainian and will be able to translate your discussions to facilitate reaching a resolution.

Of course, as the Ukrainian mediators are guests and mothers themselves, their time is limited but they will do their best to help anyone who needs it.

If you think it would be helpful to set up a meeting with a mediator please visit this page and complete the referral form.

This information is also available in Ukrainian here: https://www.nfm.org.uk/homes-for-ukraine-ukraine/